Is Cloud POS Mature Enough To Run Your Restaurant? 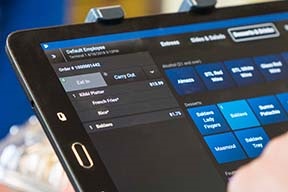 Merchants considering cloud POS may wonder whether this technology is mature enough to run their business.

Although cloud POS is one of the hottest trends in POS software, it has been on the market for a relatively short time compared to decades-old client-server POS technology. Merchants considering their next point of sale system may understandably have many questions. Among them: 'Can I trust my business to a cloud POS?'.

Client-server POS technologies have been around a long time. They have a lot of depth and breadth in terms of functionality. Their code base is mature and largely stable, and the ecosystem of compatible hardware is highly developed.

If your restaurant, chain or other business has been around awhile, you probably have one of these systems or you've used one. These systems have been developed over a period of decades. Often, a well-developed ecosystem of resellers know these systems, what makes them tick and how to install them.

Unless you are a technology enthusiast willing to accept a bit of risk, you may be somewhat hesitant to buy into the latest thing. Cloud POS is relatively new. As with most new technologies, there is natural reticence and caution among a large group of people.

Back To Our Question: Is Cloud Mature Enough?

The short answer is: yes.

Not that long ago, people didn’t really understand, much less accept, cloud. Now, people hear "if you're not in a cloud environment, you're falling behind." This same kind of change happened when people switched from typewriters to word processors, and from DOS to the Windows operating system. Today, we’re seeing cloud doubters adopt, and cloud adopters enthusiastically go all-in. There is a general acceptance of, and preference for, cloud-based applications.

Whereas the client-server POS took decades to reach its current level of maturity, cloud POS will not take as long to reach feature parity. That’s because the cloud development model allows faster delivery of rich functionality. We’re seeing cloud POS develop a rich feature set much more quickly, and that includes connectors to third-party solutions like mobile ordering and delivery, and so on.

That said, there have been some cloud POS solutions that have been released before they were ready for market. That’s a risk that startup software companies often take in order to raise funding and reach their initial public offering (IPO). Unwary customers have bought these solutions, only to discover them to be buggy or long on promises but short on features actually delivered. With a host of cloud POS companies being bought up or closing down outright, who do you want to trust with a system you’ll need for years or decades to come?

In an earlier post, we shared some of the ways Cloud POS differs from traditional POS as well as some of the characteristics of a genuine cloud POS. The software and the programming language used to create it are a couple of ways to judge whether the cloud POS you are considering truly is a cloud POS.

The Value Of A Stable POS Partner

The company behind the product can be equally important among your cloud POS decision factors. Although a richly featured cloud POS can be developed much more rapidly than an equally feature-rich client-server POS, developing a full-featured cloud POS still takes considerable commitment in terms of resources and finances.

Companies that are stable and profitable, like Xenial, A Global Payments Company, can endure the considerable expense of developing and sustaining a cloud POS development project, not to mention the expense and time involved in marketing it. If you are considering cloud providers, be sure to ask questions about the tenure and financial backing of the companies you are considering.

Editor's Note: A version of this article originally appeared on Forbes.